The driver/rider of a vehicle intending to pass any other vehicle proceeding in the same direction on a public road shall pass to the right thereof at a safe distance and shall not again drive on the left side of the roadway until safely clear of the vehicle so passed.

Exceeding the speed limit when overtaking/passing is not permissible.
Passing on the left of such vehicle shall be permissible if the person driving the passing vehicle can do so with safety to himself or herself and other traffic, and -

a. the vehicle being passed is turning to its right or the driver/rider thereof has signalled his or her intention of turning to his or her right;

b. such road is a public road in an urban area and -
i. is restricted to vehicles moving in one direction; and
ii. the roadway is of sufficient width for two or more lines of moving vehicles;

c. such road is a public road in an urban area and the roadway is of sufficient width for two or more lines of moving vehicles moving in each direction;

d. the roadway of such road is restricted to vehicles moving in one direction and is divided into traffic lanes by appropriate road traffic signs; or

e. he or she is driving in compliance with the directions of a traffic officer.

Provided further that in no event shall any passing be done by driving on the shoulder of the roadway or on the verge of a public road.
The driver/rider of a vehicle shall not pass other traffic moving in the same direction on a public road when approaching -

a. the summit of a rise;
b. a curve; or
c. any other place where the view is so restricted that any such passing could create a hazard in relation to other traffic, which might approach from the opposite direction, unless -
i. he or she can do so without encroaching on the right-hand side of the roadway; or
ii. the roadway of such road is restricted to vehicles moving in one direction.

When you become aware of other traffic proceeding in the same direction and wishing to pass your vehicle -
• drive as near to the left edge of the roadway as is possible, without endangering yourself, other traffic or property, and
• do not accelerate the speed of your vehicle until the other vehicle has passed.

When about to pass oncoming traffic, the driver/rider of a motor vehicle must ensure that his/her vehicle does not encroach on the roadway to his/ her right in such manner as may obstruct or endanger such oncoming traffic.

The driver/rider of a vehicle intending to pass a stationary bus must do so with due care for the safety of persons who are approaching or leaving or may approach or leave such bus.

A driver of a vehicle who wishes to overtake another vehicle ahead that is not in the left hand lane can make the driver of such vehicle aware that he or she intends to overtake by giving a visible signal by means of flashing the headlights of his or her vehicle.

Vehicles must keep left and overtake to the right on any freeway. 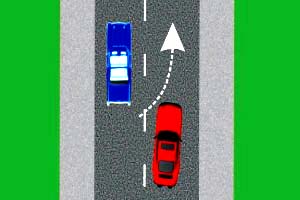 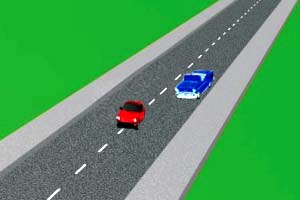